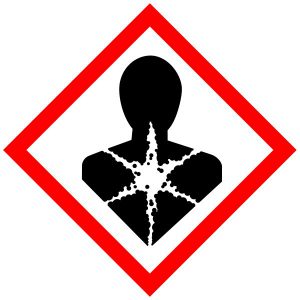 Hazard pictograms are a major component of the GHS (Globally Harmonized System for Hazard Classification and Labelling of Chemicals). The GHS includes two sets of pictograms: one set used for labelling containers and for workplace hazard warnings, and a second set used during the transport of dangerous goods (TDG).

The GHS pictogram is a graphical representation that includes a symbol along with other graphic elements such as a border, background pattern or color intended to convey specific information. The GHS pictograms are intended to replace older systems such as Canada’s WHMIS (Workplace Hazardous Materials Information System) and the European Union pictograms as defined in the Dangerous Substances Directive.

The following is a description of the GHS pictograms used during the Transport of Dangerous Goods (TDG).

2. Division 1.4: Substances and articles which are classified as explosives but which present no significant hazard

3. Division 1.5: Very insensitive substances which have a mass explosion hazard

4. Division 1.6: Extremely insensitive articles which do not have a mass explosion hazard

1. Division 2.1
(Flammable gases)
Gases which at 20ºC and a standard pressure of 101.3 kPa:
-are ignitable when in a mixture of 13 percent or less by volume with air; or
-have a flammable range with air of at least 12 percentage points regardless of the lower flammable limit

2. Division 2.2
(Non-flammable non-toxic gases)
Gases which:
-are asphyxiant: gases which dilute or replace the oxygen normally in the atmosphere; OR
-are oxidizing: gases which may, generally by providing oxygen, cause or contribure to the combustion of other material more than air does; OR
-do not come under the other divisions

Classes 3 and 4:
Flammable liquids and solids

1. Class 3
(Flammable liquids)
-Liquids which have a flash point of less than 60ºC and which are capable of sustaining combustion

2. Division 4.1
(Flammable solids, self-reactive substances and solid desensitized explosives)
-solids which, under conditions encountered in transport, are readily combustible or may cause or contribute to fire through friction
-self-reactive substances which are liable to undergo a strongly exothermic reaction
-solid desensitized explosives which may explode if not diluted sufficiently

Division 5.1
(Oxidizing substances)
-Substances which, while in themselves not necessarily combustible, may (generally by yielding oxygen) cause, or contribute to, the combustion of other material

Division 5.2
(Organic peroxides)
-Organic substances which contain the bivalent -O-O- structure and may be considered derivatives of hydrogen peroxide, where one or both of the hydrogen atoms have been replaced by organic radicals Division 6.1

Class 8
(Corrosive substances)
-Substances which: cause full thickness destruction of intact skin tissue on exposure time of less than 4 hours; or exhibit a corrosion rate of more than 6.25 mm per year on either steel or aluminum surfaces at 55ºC

NOTE: There are several pictograms that have been included in the UN Model Regulations but have not been incorporated into the GHS because of the nature of the hazards. These pictograms are: Class 6.2 (infectious substances), Class 7 (radioactive material), and Class 9 (miscellaneous dangerous substances and articles).

NOTE: For a description of the GHS hazard pictograms used for labelling containers and for workplace hazard warnings, see the article “GHS Pictograms Part 1”.